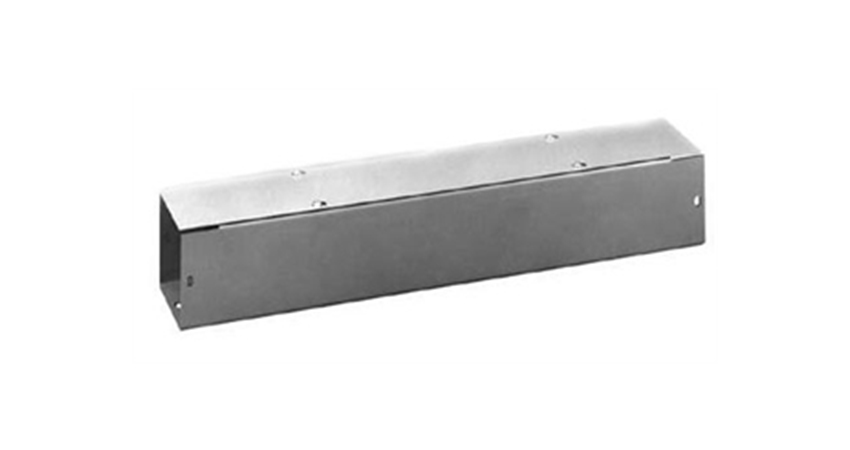 Conduit is generally installed by electricians at the site of installation of electrical equipment. Its use, form, and installation details are often specified by wiring regulations, such as the US National Electrical Code (NEC) or other national or local code. The term "conduit" is commonly used by electricians to describe any system that contains electrical conductors, but the term has a more restrictive technical definition when used in official wiring regulations.

Corrosion is the gradual destruction of materials (usually metals) by chemical reaction with their environment.

In the most common use of the word, this means electrochemical oxidation of metals in reaction with an oxidant such as oxygen. Rusting, the formation of iron oxides is a well-known example of electrochemical corrosion. This type of damage typically produces oxide(s) or salt(s) of the original metal. Corrosion can also occur in materials other than metals, such as ceramics or polymers, although in this context, the term degradation is more common. Corrosion degrades the useful properties of materials and structures including strength, appearance and permeability to liquids and gases.

Many structural alloys corrode merely from exposure to moisture in air, but the process can be strongly affected by exposure to certain substances. Corrosion can be concentrated locally to form a pit or crack, or it can extend across a wide area more or less uniformly corroding the surface. Because corrosion is a diffusion-controlled process, it occurs on exposed surfaces. As a result, methods to reduce the activity of the exposed surface, such as passivization and chromatic conversion, can increase a material's corrosion resistance. However, some corrosion mechanisms are less visible and less predictable.

Galvanized rigid conduit (GRC) is galvanized steel tubing, with a tubing wall that is thick enough to allow it to be threaded. Its common applications are in commercial and industrial construction.

Intermediate Metal Conduit (IMC) is a steel tubing heavier than EMT but lighter than RMC. It may be threaded.

Electrical metallic tubing (EMT), sometimes called thin-wall, is commonly used instead of galvanized rigid conduit (GRC), as it is less costly and lighter than GRC. EMT itself is not threaded, but can be used with threaded fittings that clamp to it. Lengths of conduit are connected to each other and to equipment with clamp-type fittings. Like GRC, EMT is more common in commercial and industrial buildings than in residential applications. EMT is generally made of coated steel, though it may be aluminum.

Aluminum conduit, similar to galvanized steel conduit, is a rigid tube, generally used in commercial and industrial applications where a higher resistance to corrosion is needed. Such locations would include food processing plants, where large amounts of water and cleaning chemicals would make galvanized conduit unsuitable. Aluminum cannot be directly embedded in concrete, since the metal reacts with the alkalis in cement. The conduit may be coated to prevent corrosion by incidental contact with concrete. Aluminum conduit is generally lower cost than steel in addition to having a lower labor cost to install, since a length of aluminum conduit will have about one-third the weight of an equally-sized rigid steel conduit.

In extreme corrosion environments where plastic coating of the tubing is insufficient, conduits may be made from stainless steel, bronze, or brass

PVC conduit is the lightest in weight compared to other conduit materials, and usually lower in cost than other forms of conduit. In North American electrical practice, it is available in three different wall thicknesses, with the thin-wall variety only suitable for embedded use in concrete, and heavier grades suitable for direct burial and exposed work. Most of the various fittings made for metal conduit are also available in PVC form. The plastic material resists moisture and many corrosive substances, but since the tubing is non-conductive an extra bonding (grounding) conductor must be pulled into each conduit. PVC conduit may be heated and bent in the field, by using special heating tools designed for the purpose.

Joints to fittings are made with slip-on solvent-welded connections, which set up rapidly after assembly and attain full strength in about one day. Since slip-fit sections do not need to be rotated during assembly, the special union fittings used with threaded conduit (such as Ericson) are not required. Since PVC conduit has a higher coefficient of thermal expansion than other types, it must be mounted to allow for expansion and contraction of each run. Care should be taken when installing PVC underground in multiple or parallel run configurations due to mutual heating effect of densely packed cables, because the conduit will deform when heated.

Electrical Nonmetallic Tubing (ENT) is a thin-walled corrugated tubing that is moisture-resistant and flame retardant. It is pliable such that it can be bent by hand, and is often flexible although the fittings are not. It is not threaded due to its corrugated shape, although some fittings might be.

Flexible conduits are used to connect to motors or other devices where isolation from vibration is useful, or where an excess number of fittings would be needed to use rigid connections. Electrical codes may restrict the length of a run of some types of flexible conduit.

Flexible Metallic Conduit (FMC, often informally called greenfield or flex) is made by the helical coiling of a self-interlocked ribbed strip of aluminum or steel, forming a hollow tube through which wires can be pulled. FMC is used primarily in dry areas where it would be impractical to install EMT or other non-flexible conduit, yet where metallic strength to protect conductors is still required. The flexible tubing does not maintain any permanent bend, and can flex freely.

FMC may be used as an equipment grounding conductor if specific provisions are met regarding the trade size and length of FMC used, depending on the amperage of the circuits contained in the conduit. In general, an equipment grounding conductor must be pulled through the FMC with an ampacity suitable to carry the fault current likely imposed on the largest circuit contained within the FMC.

Liquidtight Flexible Metal Conduit (LFMC) is a metallic flexible conduit covered by a waterproof plastic coating. The interior is similar to FMC.

Flexible Metallic Tubing (FMT) is not the same as Flexible Metallic Conduit (FMC) which is described in National Electrical Code (NEC) Article 348. FMT is a raceway, but not a conduit and is described in a separate NEC Article 360. It only comes in 1/2" & 3/4" trade sizes, whereas FMC is sized 1/2" ~ 4" trade sizes. NEC 360.2 describes it as: "A raceway that is circular in cross section, flexible, metallic and liquidtight without a nonmetallic jacket."

Liquidtight Flexible Nonmetallic Conduit (LFNC) refers to several types of flame-resistant non-metallic tubing. Interior surfaces may be smooth or corrugated. There may be integral reinforcement within the conduit wall. It is also known as FNMC.

Conduit may be installed underground between buildings, structures, or devices to allow installation of power and communication cables. An assembly of these conduits, often called a duct bank, may either be directly buried in earth, or encased in concrete (sometimes with reinforcing rebar to aid against shear forces). Alternatively, a duct bank may be installed in a utility tunnel. A duct bank will allow replacement of damaged cables between buildings or additional power and communications circuits to be added, without the expense of re-excavation of a trench. While metal conduit is occasionally used for burial, usually PVC, polyethylene or polystyrene plastics are now used due to lower cost, easier installation, and better resistance to corrosion.

Formerly, compressed asbestos fiber mixed with cement (such as Transite ) was used for some underground installations. Telephone and communications circuits were typically installed in fired-clay conduit.